These three sister seedlings are virtually indistinguishable but all are easier to grow than Narcissus bulbocodium. All are “hoop petticoats” in grades of white to cream, blooming around the turn of the year. They multiply rapidly and last up to two-weeks in the cool weather. 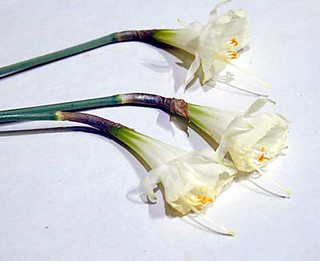 There are many clones and new ones emerging from Israel annually. Wayne showed three cultivars of this winter blooming bulb often forced indoors. The “paper whites” vary in vigor, height, flower size and scent.
The “China Lily” has a much more pleasant scent and a golden to orange cup and creamy white corolla. A third clone was a uniform light butter yellow. 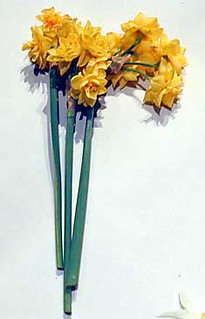 The flowers shown were quite small c. 7/8,” and quite fragrant. This is one of several taxa from the shores and islands of the Mediterranean. All bloom in winter and require dry summers. While Cyclamen hederaceum (formerly C. neopolitanum) will tolerate summer moisture, this other species will rot. 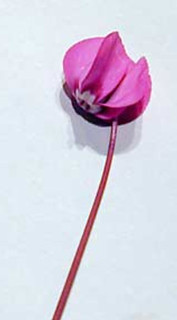 This cyclamen has unmarked leaves and tight dark pink to magenta flowers in winter. The is also a white form. Extremely hardy as it comes from the Causacus it can tolerate temperatures to O° F.

This large shrub to small tree is grown pan-tropically. All have round or hemispherical inflorescences. The one shown was a pale pink. One often sees a white form with the scent of coconut grown further south. Only hardy with protection in zone 17. An interesting challenge. The genus is dioecious.

This South African bulb is widely grown in our area and has been often shown. The evergreen straplike foliage can be rather sloppy when not in bloom. The head of blossoms is a pleasant mid-pink, quite attractive and long lasting in bloom or cut.

This was a spectacular plant about two feet tall with hairy foliage of dark green tinged reddish-brown. The plant was in bloom all along the stem with 2″ cardinal red flowers emerging from the leaf axils. This is a native of Ecuador growing in cool montane regions. It branches from the base and produces a berry-like fruit. Perhaps hardy to the mid 40’s. 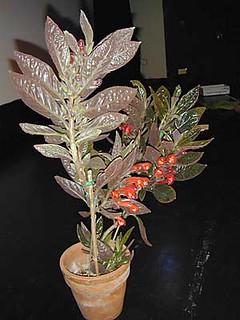 This is a form of corn George has been growing as opposed to the common sweet-corn (Zea mays). It is perennial and can be propagated by cuttings like sugar cane. Female flowers develop just below the terminal tassel and a few fertile seeds are produced. 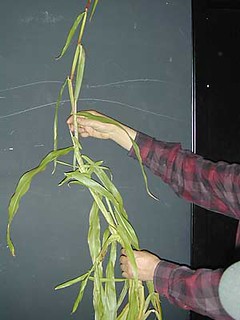