By Seán A. O’Hara 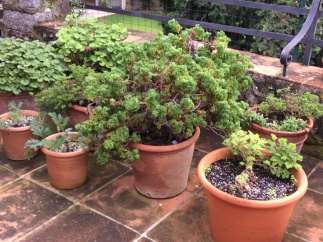 While visiting the island of Mallorca, Spain, my wife and I had just arrived at a friend’s house in a village in the Serra de Tramuntana. This was our first visit and we were at once captivated by the striking view, the beautiful house and the lovely garden. While greeting our host, I found my eye drawn to an assembly of pots on her entry patio. My wife noted my distraction saying, “Yes, I saw it too – you should take a closer look later”.

While weeding a section of our previous garden, I discovered a small Pelargonium seedling. We grew various scented types in pots on a sunny, south-west facing balcony and in a few places around the garden, so this was not surprising. But something was weird about this little plant. Unsure what it might become, I potted it up and placed it in my propagation area.

Gradually, it turned into a nice little plant with the distinctive ‘rose’ scent of P. graveolens, but the leaves looked like they were unsure about how to form themselves. As the plant grew larger, the strange character of these leaves became more pronounced and ‘set’ into little fist-like crinkled balls. Flowering was similar to P. graveolens but the flowers never fully opened, remaining as little pink ‘tubes’ and then only one or two at a time.

After a few years, I gave a cutting to our friend, Robin Parer, owner of Geraniaceae.com. She called it ‘genetically-challenged’ and seemed aware of another similar form already in the pelargonium trade, so I didn’t think much about it after that.

Some time later, Robin contacted me and said she had successfully propagated my plant and now had a number of stock plants! She wanted me to name it so she could start selling it! Seriously? I was glad I passed it along to her and that she thought it interesting enough to sell. I came up with a few uninspired naming ideas, but finally Robin suggested ‘Colocho’, which means ‘curly’ in Spanish (Central American). Perfect!

The plant Robin had mentioned as already in the trade was ‘Bontrosai’. I eventually tracked this down to Richter’s Herbs in Goodwood, Ontario, Canada near Toronto. They had trademarked the name ‘Lemon Sculpture’ for Pelargonium ‘Bontrosai’. Later I found documentation of a 2005 US patent application for ‘Bontrosai’ by Klazina Boekestijn-Vermeer of the Netherlands. I don’t know the relationship between Richter’s and Boekestijn-Vermeer and, unfortunately, Richter’s is no longer distributing their Pelargonium ‘Lemon Sculpture’ (‘Bontrosai’).

The patent document states that ‘Bontrosai’ was a chance seedling, like ‘Colocho’. Unlike ‘Colocho’, it is said to have a ‘citron’ scent (‘Colocho’ has the classic rose scent). There is even a comparison between ‘Bontrosai’ and ‘Citrosa’, a well known lemon-scented pelargonium. Also mentioned is its upright, unbranched habit. Photos depict long petioles holding the curled-up leaf well away from the stem (‘Colocho’ has shorter petioles).

Robin continues to tell me that ‘Colocho’ is one of her best selling plants! Recently, I see that this cultivar is now being picked up by various other nurseries as well (e.g. Monterey Bay Nursery). In Europe, there seem to be two similar forms being distributed as well – one rose scented like mine, one lemon scented – but both going under the same cultivar name of ‘Bontrosai’. I wondered if the distinction of their fragrance might be due to one nose vs. another, but I’ve been in on-line contact with gardeners who have grown each and they talk about other differences between the two forms.

Pelargonium ‘Bontrosai’ plant being grown in Italy, with a  rose scent (rather than lemon).

Photos found in an internet search for ‘Bonstrosai’ show two distinct plants – one upright with spaced leaves on long petioles and another more sprawling and branching with the leaves nestled closer to the stems. The latter form looks just like ‘Colocho’ and sometimes a rose-scent is mentioned.

Whether or not the European Colocho-like form is in fact the same plant that appeared in my California garden or another independent mutation is unclear, but it is certainly in the realm of possibilities. If I ever get the chance to grow one of the European forms, perhaps I’ll know more.

When I was able to closely examine our friend’s plant, it looked exactly like my ‘Colocho’ in every way, right down to the distinct subtle rose scent. Our host was pleased to think that her plant might have come from mine as it was one of her favorites. I’ve had Pelargonium seedlings appear in our gardens many times over the years, but this was the first to exhibit this strange leaf characteristic. It seems clear that this mutation appeared at least one other time in the lemon-scented form, but perhaps there were others. Meanwhile, this curious plant certainly has an appeal to many pelargonium fanciers!